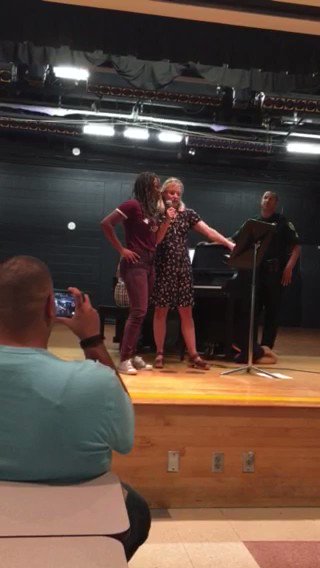 Kristen Bell helped brighten the mood of Hurricane Irma evacuees in Florida this weekend by doing what she does best — sharing songs, according to Billboard.com.

The “Frozen” actress serenaded an Orlando shelter with songs from the blockbuster movie as residents sought protection from the deadly disaster.

The actress and singer wrote that she “didn’t have the option to leave” Orlando.
On Sunday (Sept. 10), she continued to share cheerful posts of the shelter scene, showing photos of herself hanging out with seniors and a video in which she sings “You Are My Sunshine” with an older gentleman, who she jokingly refers to as her “side piece here in Orlando.”
Bell’s “Frozen” co-star Josh Gad publicly thanked her on Friday (Sept. 8) for helping his family find shelter in Orlando ahead of Irma’s arrival.
Bell wrote:

“When #HurrcaneIrma is at your heels, there’s only one thing to do: get to a shelter, grab a mic and SING,” Bell tweeted, also writing, “When youre #singinginahurricane, your volunteer back up dancers can & will steal the show. Richard and Rebecca everyone!”